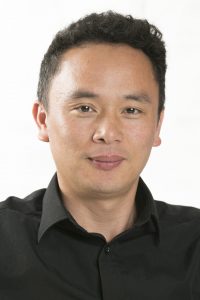 Zengbo (James) Wang received his BSc (1997) and MSc (2001) degrees in physics from Xiamen University, P.R. China, and a PhD in laser engineering from National University of Singapore (NUS) in 2005. He moved to the UK in 2006 and worked as postdocs in a few UK universities. He became a lecturer in 2009 at Manchester University and is now a senior lecturer in imaging and nanophotonics in the School of Electronic Engineering at Bangor University. He is the leading pioneer of a widely-publicized optical imaging device – the microsphere nanoscope. His current research at Bangor focuses on optical super-resolution imaging and fabrication. James is extremely keen to communicate with researchers working in other fields to explore the new applications of super-resolution nanoscopy and imaging technique, for example to study real-time response of live cell and virus interaction with medicine at nanoscale resolution.