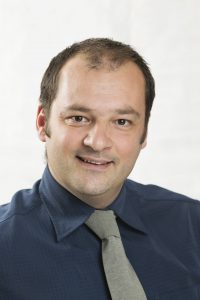 Alan completed his PhD from the University of Birmingham in 2003, and worked as a postdoc at King’s College London (2003-5) then at the University of Glasgow (2005-2013) as a postdoc, then Royal Society of Edinburgh Personal Fellow and latterly as a BHF funded Senior Scientist. In 2013 he relocated to Cardiff as a Lecturer where he is establishing a research group focussed on developing biological therapies for translational oncology applications. He was promoted to Senior Lecturer in 2014. In addition to leading his academic team, Alan is an EXEC committee member of the British Society for Gene and Cell Therapy, which serves several important roles, from communicating the science of gene and cell therapy to the public through engagement days, to lobbying politicians to influence laws surrounding science and medicine (e.g. in the recent mitochondrial donation bills).

2016 Update: Alan continues his role as Senior Lecturer in the Division of Cancer and Genetics, School of Medicine at Cardiff University.